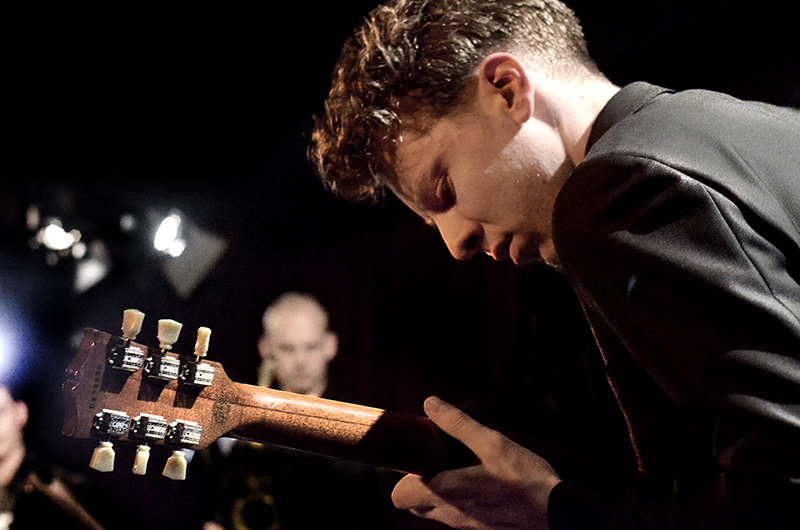 REINIER BAAS SOLO
Guitarist and composer Reinier Baas is one of the leading young figures in the Dutch jazz scene today. An active bandleader, he has been in charge of ‘The More Socially Relevant Jazz Music Ensemble’ since 2010 and is deemed ‘the hippest and most exciting jazzband of the Netherlands’ (de Volkskrant). Their irreverent nature, slightly disturbing visual language involving goats and shower scenes and their unique brand of ‘mostly improvised instrumental indie music’ earned them the prestigious Edison Award.

SONIC HEDGEHOG
Sonic Hedgehog is the unexpected consequence of a chance collaboration between the Dutch musicians Fie Schouten (bass clarinet) and Wiek Hijmans (electric guitar) and the American flutist Shanna Gutierrez, who were brought together by Dutch composer Rozalie Hirs for a trio of separable solos (Infinity Stairs) written for them as individuals. Their desire to continue working together led to the formation of Sonic Hedgehog and commissioning new works for this unique trio.

In Rozalie Hirs’ Infinity Stairs the performers join their independent solo pieces into a cohesive whole, simultaneously sustaining and abandoning their soloist individuality. The result is a piece which playfully challenges the standard notions of chamber music.
In contrast to this, Fredrick Gifford’s Adage of Spontaneity creates a meta-instrument, which below the calm surface is extremely active in subtly shifting colors.

Erin Gee’s new work for Sonic Hedgehog will focus specifically on the fringe articulations sounds of the mouth during normal vocal production, working with special mouth microphones and cameras that can capture the percussive pops, clicks and air sounds that surround each phoneme that is produced. The program begins and ends with the early Renaissance music of Dufay as a means of accentuating the broad color range of the instruments and the deep-rooted connection of contemporary music the entirety of the classical music tradition. The three polyphonic voices in Dufay’s resemble the contrapuntal textures
and use of timbre that can be heard in the rest of the program. Although seeming disparate in approach or sonically, the pieces have much more in common than expectations might suggest.