An evening of disturbance, unsettled sounds, warped club tunes and ambience. All of the acts and DJs on this line up exist in-between genres, interested in the overlaps and gaps between club environments and sound art.

AMEK collective recently celebrated ten years of experimentation in their home city, Sofia. Two of the label’s most prominent producers, Mytrip and Evitceles, play Amsterdam for the first time as part of MusicMap’s debut Showcase event. Alongside them will be three Amsterdam based acts who will be bringing their own brands of play/experimentation/selection.

This evening of cross-border exchange is brought to you by MusicMap, a platform dedicated to let you discover the world one track at a time. We’ve been tracking the Bulgarian ambient and drone scene, interviewing AMEK collective in the process, and also highlighting key labels and artists based in the Netherlands, since our inception in 2016. Discover the world one track at a time yourself via our interactive map. Check out our New Finds, Insight, Soundscape and Featured Artist posts for in depth information on everything from Peruvian footwork to Iranian sound design: https://musicmap.global/

MYTRIP
The alias of AMEK co-founder Angel Simitchiev, Mytrip’s work ranges from the introspective to deconstructed euphoria and back again.

EVITCELES
With releases on Opal Tapes, Noorden, and Seagrave, Evitceles has been busy bringing the Sofia sound to an international audience over the past years.

COLLAPSE
A DJ duo as equally obsessed with cutting edge sounds as they are with re-contexualising the Netherlands’ heritage of hardcore, trance and gabba.

DAVID GAUTHIER
A practicing artist and media studies scholar, David Gauthier also investigates time and technology as part of Vsionhairies, a collective that build and experiment with electronic music equipment. 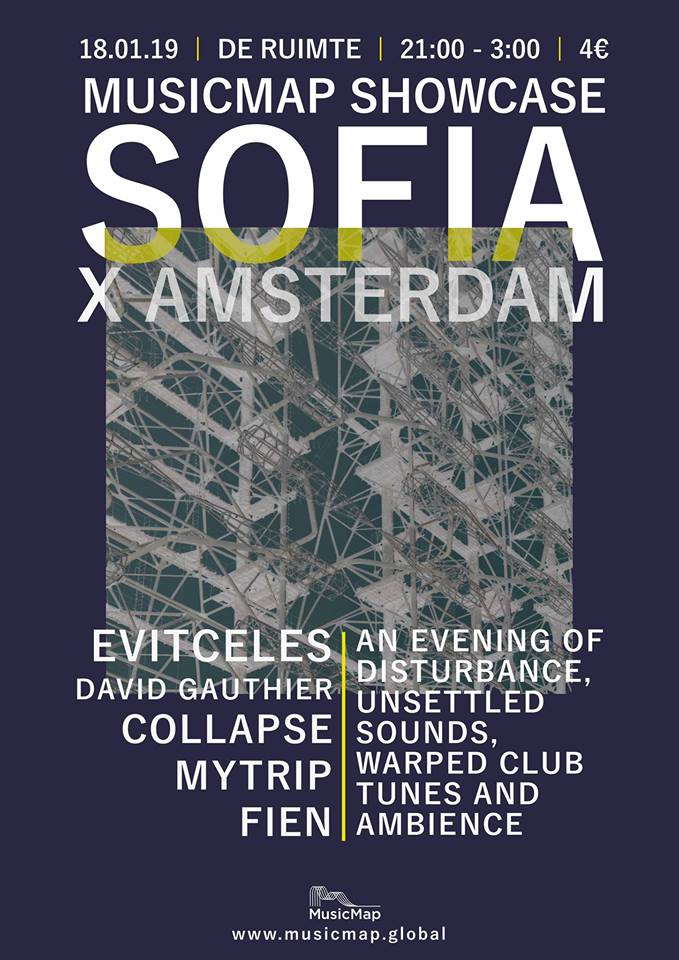