It’s time to celebrate daring music with an extensive festival at the home base of SPACE is the PLACE: De Ruimte. With 350+ music evenings, 800+ acts and 1500+ artists under its belt, the progressive performing arts organisation Space is the Place has existed for 5 years already.

Starting in the afternoon and ending in the night, SITP presents a ratatouille of beautiful musicians, bands and performing artists, representing the expression and quality of adventurous performing arts in Amsterdam and beyond. 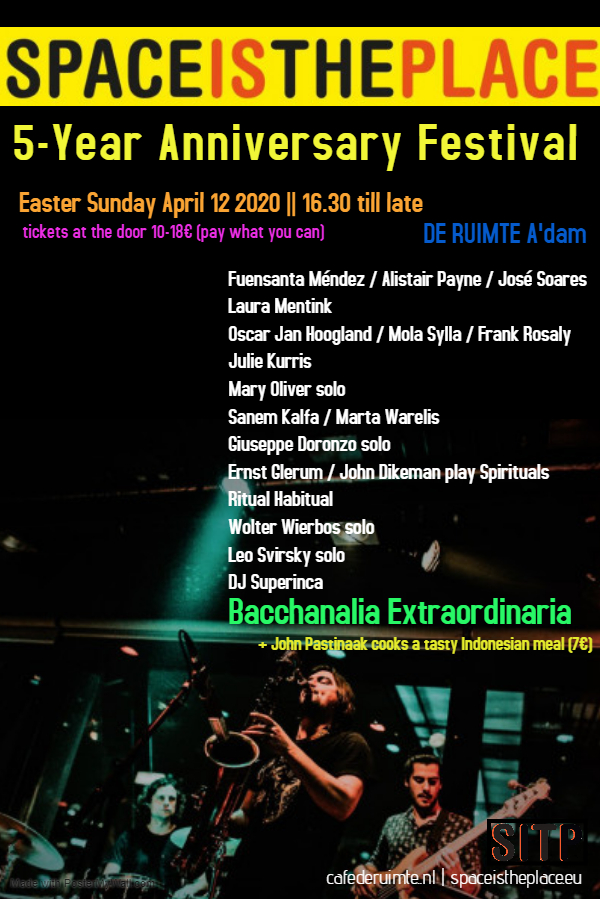 MARY OLIVER
Mary Oliver explores virtuosity in both scored and improvised music. Based in Amsterdam, Oliver is a key member of the improvising community, locally and internationally. She has performed with musicians a.o. Han Bennink, Erik Bosgraaf, Mark Dresser, Tristan Honsinger and many more. Mary Oliver is a member of the Instant Composers Pool (ICP) Orchestra.Mary Oliver – violin, viola
LAURA MENTINK

Laura Mentink is an actress and maker. She graduated from the Arnhem Theater School in 2007. She is a part of NT Gent, Hotel Modern, Bonheur, ‘t Barre Land and Maatschappij
Discordia. She performs regularly at the multidisciplinary culinary evenings ‘Ditdit-dada-ditdit’, co-organised by SITP.

JULIE KURRIS
The performances of Belgian actress and maker Julie Kurris are an attempt to grasp what cannot be uncovered. Join her imagination world that can take all paths, musically, physically, verbally, visually. She has a hand in the house everywhere.

SANEM KALFA/MARTA WARELIS
Two of the most imaginative and expressive musicians of the Amsterdam improvised music scene join forces specially for the SITP Festival.

GIUSEPPE DORONZO SOLO
“One of the most exciting fresh voices in the Dutch jazz and impro scene” (Misha Andriessen, Trouw/Jazz). As a lover of unexplored space , border crossing sounds, Giuseppe focuses his research on the baritone saxophone, aiming to explore a vocabulary that goes through his background in contemporary classical music, jazz improvisation and his interest for non-western music.

LEO SVIRSKY SOLO
Leo Svirsky (b. 1988, USA) is a Russian-American pianist and composer currently based in the Hague, Netherlands. His music explores the instability of listening and the disorientation of memory and affect while remaining grounded in history and symbol, song and story. His latest solo record, River without banks; is a masterpiece.

ERNST GLERUM/JOHN DIKEMAN
During the first ditdit-dada-ditdit in 2017, Ernst Glerum and John Dikeman were asked to play Spirituals, based on an Albert Ayler album. The concert was full of fire, enthusiasm and zeal. Later on they also played in this formation in the Bimhuis and the Zomer Jazzfietstour.

WOLTER WIERBOS SOLO
It is hard to think about the trombone in improvised music without thinking about Wolter Wierbos. Wolter plays with such passion and intuition that one can sometimes forget how mind blowing his
abilities on the instrument really are. His solo performances are, without an exception, amazing.

BACCHANALIA
The sextet Bacchanalia, led by the Uruguayan bass player Miguel Petruccelli, makes concert halls, pubs, venues and stages sweat and explode with their addictive concoction. The enchanting
Spanish-African rhythms and the raw explosive sounds of saxophone, guitar and percussion heat up the band sound, as if it is a fiery fire-spitting monster.
Expect a special formation for tonight, with extra musicians added during the concert.

for the entire SPACE is the PLACE programme, visit www.spaceistheplace.eu