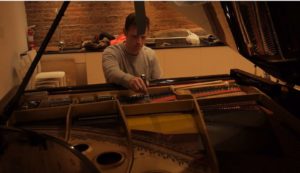 THIS EVENT HAS BEEN CANCELLED

LUKAS SIMONIS/IVAN PALACKY
In October 2018, Ivan Palacký and Lukas Simonis met again as a duo after about 10 years. During their Austrian tour in 2008, they made an adventurous expedition in the wild surroundings of the mountain village of Harrachsthal. The small tour they did in CZ resulted in the recording ‘Smet het bew erf left’. As for the title of the CD; Both performers have a rich experience with intuitive speeches during the performance and therefore usage of some random words into the abstract sonic structure is not excluded in the happening, although it will be hard to decipher them from this record.

On one hand their music is rough, edgy and uses a broad field of sounds that do not necessarily go into music-related atmospheres but border on concrete and field noises. On the other hand, the music can be listened to in an ambient context, as for some mysterious reason the musical landscape that unfolds seems to be located somewhere in between quite abstract free improv music and some sort of experimental ambient…

TOM ALDRICH
Born in 1974, grew up near Portland, Maine. Active as a musician in New York during the 90’s and early 2000’s, most notably as accordionist/composer/arranger in the experimental jazz group the Four Bags, with whom he performed at top NY venues such as BAMcafe, Knitting Factory, Celebrate Brooklyn, and at Symphony Space with legendary vocalist Jackie Cain. Moved to the Netherlands to pursue composition studies at the Royal Conservatory in the Hague from 2006-2010, where he composed for groups such as ASKO Ensemble and Bang on a Can Allstars. He has worked with artists ranging from pop songwriting icons Barry Mann and Cynthia Weil to jazz luminary Kurt Rosenwinkel. Currently based in Amsterdam.