We are looking for Spaceholders!

Funding a venue for alternative and experimental music and performing arts is a challenge. Structural subsidies are hard to come by, but the past two years we were fortunate enough to get a substantial amount of public funding from Amsterdams Fonds voor de Kunst (AFK) and Fonds Podiumkunsten (FPK). With this money we were able to take big steps towards fair pay and setting up a durable organization. We grew as a venue, with even more beautiful performances on our stage and better produced, more balanced evenings. Other major ambitions we’ve been working on is becoming a more inclusive venue, both on and off the stage, and creating a broad team of programmers that have intimate knowledge of a variety of artistic scenes.

Unfortunately, relying too much on subsidies creates a vulnerability. When Fonds Podiumkunsten published the follow-up to their subsidy for venues (Podiumregeling) in May last year, we found out that the rules can suddenly change. New guidelines meant that we could not apply, even though we had funding from the predecessor of this subsidy for the three years prior already. This was a financial setback for us that jeopardized the current cultural season. However, what came as a shock to us first, later became a reality check, and then an encouragement to think about other ways of financing De Ruimte.

We realized that we cannot keep doing what we do without structural support from the public. Our sliding scale for ticket prices already enables people that have more money to contribute more, while allowing people with a small income to come to our performances as well. Now we also need support from those that may not have the time to come to De Ruimte regularly, but do feel strongly that space for daring, experimental, fragile, bold, and experimental performing arts is vital. Not only because the fringes feed and inspire the mainstream and are a key part of the identity of Amsterdam, but also because we all need a shaking up and a dose of raw beauty from time to time. Therefore, we are asking you to become Spaceholder of De Ruimte. The membership fees we will get from our Spaceholders will allow us to keep doing what we do and more, and, as the numbers grow, become a financially sustainable cultural venue, largely independent from institutional funding.

Different options and what you get in return

Spaceholder is a yearly membership. For the first year we chose to not automatically renew, but to ask you after year one if you would like to sign up for the next year as well. Below, you find the yearly costs for each option, and what we offer in return.

€ 80: T-shirt + once a month free entrance to a specific event

€ 150: the above + paid spaceholder’s ticket available at sold out events

For everyone: yearly Spaceholder’s get together from year 2 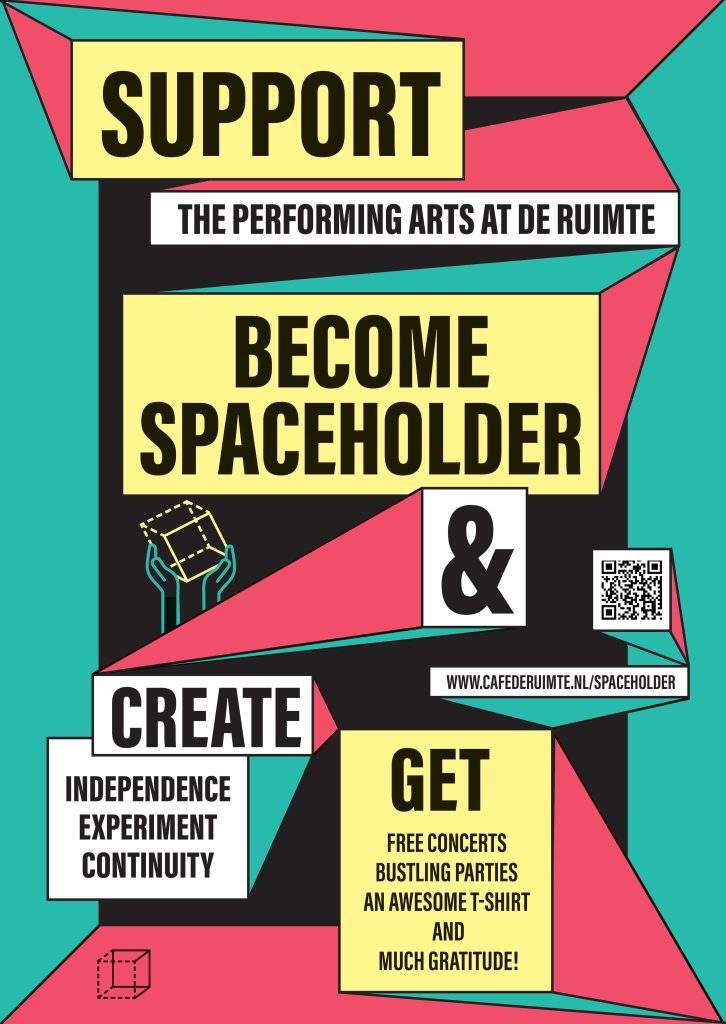